> Let Us Introduce Ourselves

よしこ先生/Yoshiko
Hello, I am Yoshiko, a Certified Public Tax Accountant of Japan, 税理士 pronounced “ZEIRI-SHI” (hereafter CPTA).
Today, Hikaru, a tax staff member of mine, is going to make sense of the chaos of your filing obligations for National and Local Individual Income Tax.
I am here to add some extra useful information for you.

What is hard to understand is that he did not have to pay any tax due to these tax returns for 2017.  However, in spite of the fact that he had no income at all in 2018, and, thus, no filing obligation for either National or Local Individual Income Tax returns in 2018, he had to pay some Local Individual Income Tax in 2018.
We will figure out the reason with Yoshiko, today.

あきら/Akira
Hello, guys.  I am Akira.


As Yoshiko said, the series of tax things I faced was chaotic for me.  I am so glad that Yoshiko and Hikaru are going to explain what happened to my incomes and taxes in 2017 and 2018.

1) Who has to file National Individual Income Tax Return.

よしこ先生/Yoshiko
First, tell me who has an obligation to file a return for National Individual Income Tax, 所得税 pronouced “Shotoku-Zei” (hereafter “STZ”) .

ヒカル/Hikaru
It is an easy question.

ZMS is a subordinate organization of the National Tax Agency of Japan (hereafter NTA) and set up more than 500 locations all over Japan.

Please be aware that you can only submit your STZ return to your 所轄税務署 pronounced “SHOKATU-ZEIMU-SHO” (hereafter SZMS).  SZMS is a ZMS which has jurisdiction over your residential district.  You cannot submit any forms including tax returns to the NTA directly.

2) Where You Find Your Gross Taxable Income. 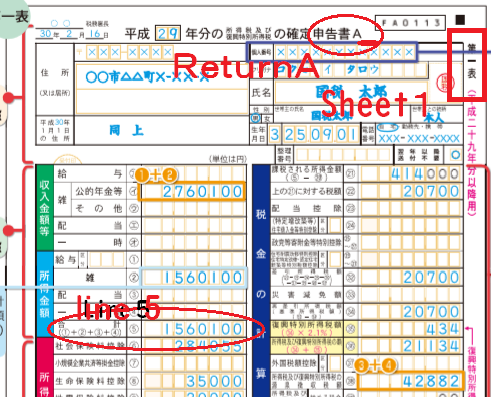 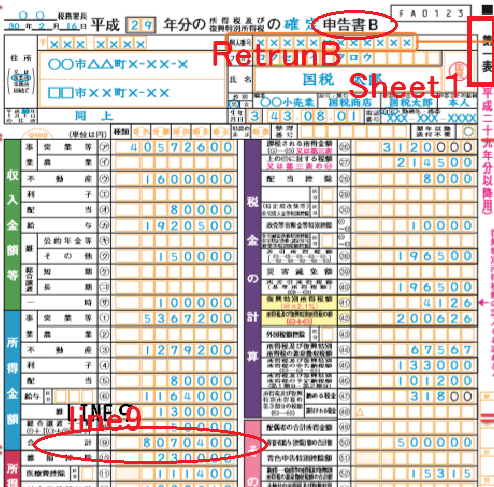 よしこ先生/Yoshiko
For the majority of taxpayers, an STZ Return has only 2 sheets, Sheet 1 (第一表）and Sheet 2 (第二表).

However, the taxpayers who have Separately Taxed Incomes, 分離課税所得 pronounced “BUNRI-KAZEI-SHOTOKU” (hereafter BKS), such as Real Estate Capital Gain, Investment Capital Gain, and etc., have Sheet 3 (第三表）for Return B.

In this case, it is the total of the red section highlighted on sheet 3 of Return B (SEE pic 3). 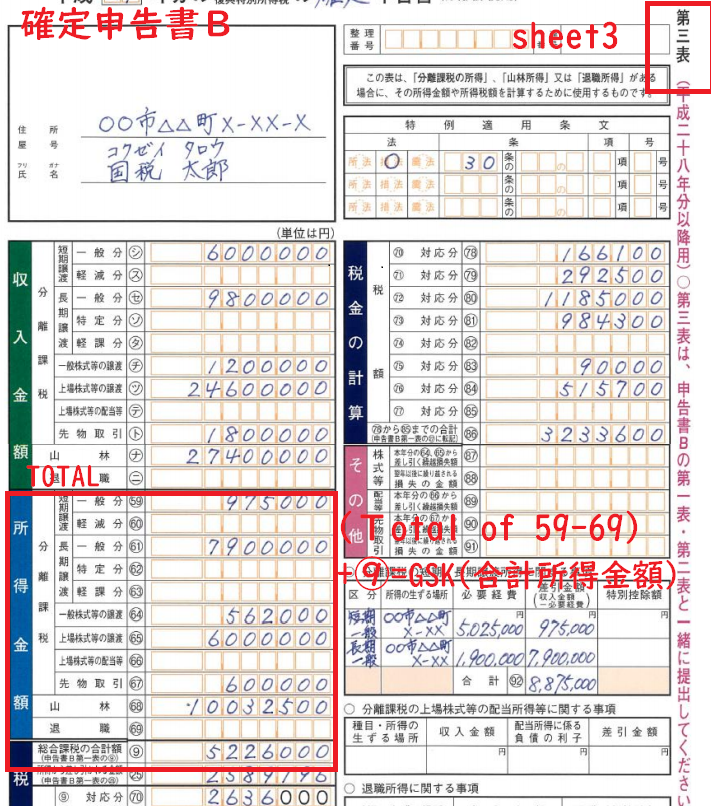 Please note that you should consult a 税理士, CPTA, or ZMS if you are in any of the following situations:
1) having 第四表, Sheet 4 of Return B.
2) having losses in this tax year.
3) applying Aggregation of Profit and Loss Provision, 損益通算 pronounced “Son-Eki-Tuusan” in this tax year.
4) carrying Deferred Taxable Loss, 繰越損失 pronounced “Kurikoshi-Sonshitu” in the recent four tax years including this year.

In these cases, determining GSK is not simple, besides the judgment of whether filing a return or not should be based on which is the most preferable for you, not based on whether or not you have a legal obligation for filing a tax return.

ヒカル/Hikaru
We finished the filing obligation from the STZ point of view.
Next, we will talk about Individual Inhabitant Tax, 個人住民税 pronounced “KOJIN-JYUUMIN-ZEI” (hereafter “KJZ”).

Thus, the municipality will receive your 2018 tax information around April 2019 and will complete the computation of your KJZ based on your 2018 income, then, mail a tax bill to you or your employer if you are a salary earner in June.

Commonly, you have to pay your KJZ in four equal installments, due at the end of June, August, October in 2019 and January in 2020, or your employer will deduct your KJZ from your monthly salaries over the period of June 2019 to March 2020.

As some of you might already realize, if you quit your job and have no income after that, it would be better for you to keep a certain fund for your KJZ for the next year.

Even if you do not have any income in 2019, you still have to pay the high KJZ in 2019 regardless of your current income because it is computed based on your income in 2018.

あきら/Akira
That happened to me last year.  I had to pay some KJZ even though I had no income at all in the year of the KJZ payment.

ヒカル/Hikaru
Next, we will talk about Filing Obligation for KJZ.

アキラ / Akira
I had quit my job in February 2017 and did not have a filing obligation that year.

However, I got a notice from the municipal government around May 2018, and they said to me that I should have filed my KJZ Return for 2017 by March 15, 2018, which I did following the municipal officer’s instruction.

よしこ先生/Yoshiko
That seems the typical case where you must file your KJZ Return for the municipality but not your STZ return for the ZMS.

If it is possible, can you give us your real figures, Akira?

Even though I filed my KJZ Return and paid some KJZ following the instruction by a municipal officer, I did not understand the system and have had doubts about the tax procedures all the way up to now.

あきら/Akira
I was living in Edgawa-Ku, Tokyo, and had no spouse nor qualified dependant.

よしこ先生/Yoshiko
We already know that you do not have to file an STZ return when your GSK is 380,000 yen or less because you explained it earlier.

Continue to talk about KJZ, please.

よしこ先生/Yoshiko
Please do not forget that there are two types of KJZ, the KJZ per income and the KJZ per capita.  Besides, Standard Deductions for KJZ varies widely depending on your detailed personal conditions.

So I recommend, in most cases, contacting municipality to find the exact figure of your Standard Deductions for KJZ per income and per capita.

In Akira’s case,  the Standard deductions of both KJZ per income and KJZ per capita are 370,000 yen as a single taxpayer.  Your Standard Deduction is determined by in which prefecture and municipal district you are living, if you have qualified spouse or dependents, what kinds of incomes you have, and etc.

相談者/Consulter あきら/Akira
Thank you, Yoshiko.  Thank you, Hikaru.  Now, I finally get it.

よしこ先生/Yoshiko
You are welcome, Akira.

However, your case is the simplest case because you are single and have no family.  The KJZ formula is complicating especially when taxpayers have a family.

So, when you do not file an STZ return, I recommend you to contact municipalities to find how to treat your KJZ matter.

ヒカル/Hikaru
You are welcome, Akira.

Yoshiko, you mentioned a posibility of applying a 個人住民税, KJZ refund the other day.  Please tell us about it.

よしこ/Yoshiko
The safest and simplest way to avoid to miss an opportunity to apply for a refund or not to pay unnecessary taxes is that filing STZ return to reduce your GSK equal or under 280,000 yen because, to the best of my knowledge, the lowest tax exemption is 280,000 yen in both National and Local Individual Income Taxes.  Besides, if you file
an STZ return, it will be transferred to your municipality.

よしこ先生/Yoshiko
It happens to many people.  Neither municipal officers nor ZMS officers do not advise you to reduce your tax payment.  It is your responsibility to study the tax regulations and file a correct tax return because Japanese tax acts adopt a self-assessment system.

ヒカル/Hikaru
By the way, I think that these differences between the National Tax Deductions and Local Tax Deductions make the tax return filing obligations or other tax procedures complicating.

So that means Akira could have avoided any KJZ payment in 2018 anyway.